This week, I got to attend the NIEA’s 2017 Hill Day. I came to listen and to learn what people are thinking about with regard to recent Indian education legislation. It was so exciting to hear leaders in Indian education sharing their perspectives on federal funding, innovation, and the rollout of the ESSA. Many shared similar feelings about the rollout of the new law, including ongoing concerns about the need for racially disaggregated data, for culturally relevant curriculum (and identifying teachers implement it), and for secure funding not subject to the whims of changing administrations. Many also discussed the potential for positive, collaborative relationships with states, federal agencies, and local districts based on the government-to-government relationship.

The most thrilling and inspiring information f 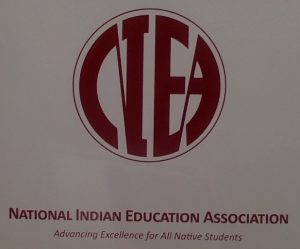 rom today came from states and tribes who are already engaged in the meaningful, ongoing consultation that can lead to positive results for kids. Notable examples included the work of the 39 Oklahoma tribes in conversation with state school superintendent Joy Hofmeister to offer 10 (!!!) Native languages as foreign languages to satisfy graduation requirements and to bring the Native high school graduation rate to 82%. As Superintendent Hofmeister noted, “It begins with consultation and collaboration with ESSA.” Also notable was the example of the Baboquivari school district in Arizona which has utilized the structures and resources at its disposal to reinvigorate a local public school district, drawing on Impact Aid funds to invest in teachers and using the state’s alternative certification program to bring in high quality language and culture instructors. There are thrilling examples of how charter schools can work for Native communities when they’re developed by the community based on community needs and values (not brought in from elsewhere), and I can’t wait to learn more about the work that Kara Bobroff is doing with the Native American Community Academy and NACA Inspired Schools Network. Perhaps the most exciting example of the day for me came from Sam Morseau with the Pokagon Band of Potawatomi. In preparing for ESSA, tribes in Michigan passed a strategic resolution which gives tribes the power to designate their liaison to the state for the purposes of working on ESSA. This resolution, passed by both individual tribes and by the United Tribes of Michigan, became part of the Michigan state plan for ESSA rollout which is now up for public comment.

The kind of information-sharing and collaboration that happens at NIEA will ensure that representatives from Indian Country have a seat at the table and that Native youth are represented throughout the planning and implementation of ESSA.

So much of the conversation at NIEA this week was about utilizing the resources and structures already at your disposal to ensure positive outcomes for Native youth. Folks working in Indian Ed are collaborating and sharing information, identifying strategies that have worked elsewhere and then tailoring them to local contexts. Even beyond the law itself, the ESSA’s increased consulation requirements can be a stepping stone for future meaningful collaboration. Laws can be fickle, and the implementation of them can shift in seemingly mercurial ways as federal administrations come and go. As someone said today, this moment may be a once-in-a-generation opportunity. We can take advantage of the consultation rules built into the ESSA to set ourselves up for generations of improved school infrastructures, safer learning environments, and more culturally relevant curricular resources. I’m leaving today hopeful, looking forward to learning more from the people I met and excited for the future of Indian country with such brilliant, dedicated, and creative administrators, teachers, and policy advocates working on behalf of Native students.

This entry was posted in Collaboration, Decolonizing Education, Indian Education. Bookmark the permalink.