The Importance of Seeing Each Other

I love the Native American and Indigenous Studies Association annual conference. I love that it seems to be guided by LaDonna Harris’ “four R’s” (relationship, responsibility, reciprocity, redistribution) and that at NAISA, I don’t have to explain my research principles or who I am. For example, in May of this year, we had approximately 700 people come to Honolulu for a week of learning and engaging in community service. That’s right. People came to a conference in Hawai‘i and intentionally gave up their time on the beach to give back to the communities whose land we were on. I also love NAISA for its incredible diversity of scholarship, of tribal nations, of geography, of career stages. At NAISA, I have found mentors and colleagues, and each year is like a reunion of people I consider my extended family. 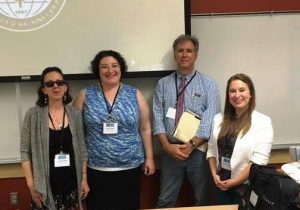 Our day of service in Hawai’i at Paepae o He’eia, photo by Marie Alohalani Brown

This week, I’m at a new research conference for me. Since I’m new, I do have to explain myself, my tribal affiliation, the historical and legal context for my research. I also feel a bit like an outsider here — I assumed that a conference focused on race and education would include a significant focus on Native peoples, but I’m one of only a handful of people engaged in scholarship with indigenous communities. Initially, it felt pretty isolating.

Then Dr. Daniel Solórzano gave a keynote address to the graduate students in which he discussed the importance of micro-affirmations as a way to make people feel acknowledged and valued. Micro-affirmations can be any small gesture, verbal or non-verbal, which send the message of “I see you. You have value in this space.” It is our responsibility to our relations to lift them up and support them in spaces where Native people are underrepresented. Within the context of academic conferences, this is how we build up and support a network of Native change-agents in the Academy.

Some of the organizers of the conference recognize the importance of trying to acknowledge and include Native peoples. Today’s sessions opened with a welcome and blessing from Kiowa and Arapaho elder John Emhoolah. A conference organizer helped introduce me to a Tohono O’odham elder (who worked on the Turtle Mountain ICC case!) and a Native grad student who is developing culturally-based writing projects for Native high schoolers. Meeting these Native people at a conference where we are far in the minority made me feel acknowledged, included, valued. I am grateful for them, and for the new relationships we’re building. Maybe I don’t feel like such an outsider after all.

This entry was posted in Dissertating, Research Values. Bookmark the permalink.

1 Response to The Importance of Seeing Each Other